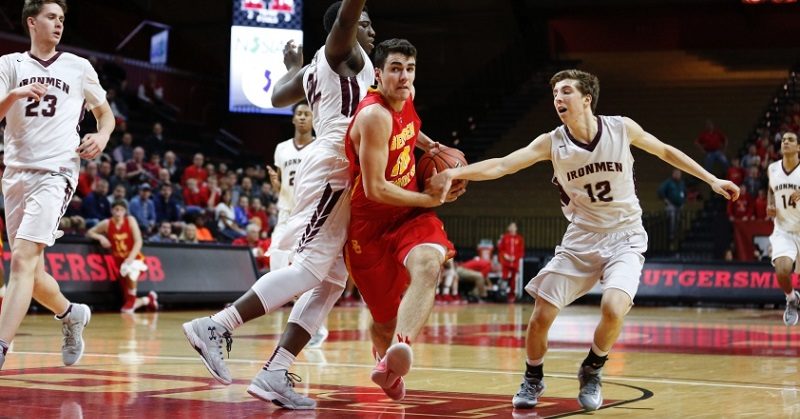 Reviewing the game of Gabriele Stefanini, key player of Bergen Catholic in the last two years and ready for the next chapter of his young career at Columbia.

Well-rounded, tough, mature: these may be the most accurate adjectives that one can use to describe Gabriele Stefanini‘s game. This soon-to-be 18-year-old, 6-foot-4 combo guard has been a fundamental piece for Bergen Catholic since his arrival in the late summer of 2015.

HIS SEASON – Along with Fairfield commit Taj Benning, Gabe was a reference point for the Crusaders and averaged more than 17 points per game in his senior year, leading the team in various aspects of the stats sheet: points, offensive rebounds, assists, steals and shooting percentage, whether from the field, the three-point line or the free-throw line. In his two years in Oradell (NJ), this young italian from Bologna ended up having some remarkable percentages: 56 FG%, 46 3P% and 90 FT%.

Bergen Catholic ended its 2017 with a 22-7 record in a season marked – for better or worse – by many rivalry games played against Don Bosco Prep (30-2), a top team in the Tri-State Area. In their first meeting, the Crusaders managed to win their first road game in 11 years against the Ironmen (67-62 with a clutch 2/2 from the charity line by Stefanini). Later on, Don Bosco had its revenge winning on Bergen Catholic’s court (66-61).

The two teams met again, this time in the Bergen County Jamboree title game: Don Bosco won 53-52 thanks to a free throw made by Marcellus Earlington with 6.1 seconds left to play.

Less than two weeks later, another title game – the one for the Non-Public A North – and another 1-point win by the Ironmen (60-59) secured in the last seconds with a free throw made by Matthew Herasme with 3.2 seconds on the clock. This game was Stefanini’s swan song as a Crusaders’ player, having a dominant offensive performance (27 points with 9/16 FG and 4/4 FT) and scoring 7 points during the last minute that kept his team alive till the end.

In these four rivalry games, Stefanini has been BC’s best scorer three times, scoring a total of 82 points.

SHARPSHOOTER – Three-point shooting is one of the abilities that stands out the most in his extended repertoire. In addition to his efficiency and a flowing, solid and fairly quick technique, he has an impressive talent to score from every spot around the arc. The skill of his catch-and-shoot three-pointers from both corners – coming off the screen or waiting for the kick-out pass – makes him a very high threat for every defense.

Off-the-dribble three-pointers are pretty rare, mostly because of his constant search for the most efficient solution – whether for him or his teammates. Anyway, if needed, he doesn’t hesitate much and he’s unlikely to let down.

ATTACKING THE PAINT – Giving an average elevation (he can dunk but always goes for the layup when in traffic) and a decent – not overwhelming – quickness, Stefanini uses other weapons to attack the basket: a usually adequate first step, a crossover dribble executed to protect the ball and gain space (his behind-the-back dribble is often used enough to be some kind of a signature move), great balance, ability to draw the contact and make a shot in spite of it. He’s perfectly ambidextrous in every aspect of the game: this breaks off every attempt to drive him on an unfavorable side of the basket, since he hasn’t one. Already able to change speed, it’s easy to imagine him acquiring a proper deceptive speed in the future, if he’ll ever emphasize this skill.

When driving to the basket is denied, he can adjust to the situation with a very good use of the pivot foot for a turnaround jumper or a more “classic” jump shot off the dribble. In both cases, he’s very effective and hard to guard.

PLAYMAKING – His transition towards the PG position had its positive outcomes during the last season. As a primary ball handler, his leadership stood out thanks to his personality, a certain skill of reading the defense correctly and a solid ball handling. Able to distribute assists regularly and with a fair variety of solutions, he exploits his penetration abilities not just to create a shot for himself but for his teammates as well which, for example, he can spot on the three-point line or next to the basket, punishing opponents’ double-teaming or distractions.

Along with Benning, Stefanini gave to this year’s Bergen Catholic a distinct inclination for fastbreak plays, a kind of situation where he’s very comfortable because of his ability to run and dribble without losing control. Not less important, a nice dose of creativity, good court vision and the ability to start the transition with some quick, long and accurate outlet pass.

PICK AND ROLL – Far from being perfect, however he’s so well-rounded that his weaknesses are pretty minimal on the offensive end. As for his choices, some flaws are detectable in pick and roll situations (clip 1), especially when he has to face a double-teaming. To be honest, these mistakes don’t seem particularly repeated and there are several examples of good reads, also while facing double-teaming (clip 2).

REBOUNDING – His relentless attitude on the floor is testified by a constant contribution under the glass: he had many double-double games thanks to a very good reaction and the ability to exploit opponents’ box out flaws.

DEFENSE – He provides a valuable contribution on D in different ways, for example with some notable results when it comes to contain a fastbreak or a transition play. He’s able to guard a good part of his opponents, standing out for his effort when closing-out his man on the corner – however, in general, it looks like there’s still some work to do in this area in terms of speed and reaction. He can provide ball pressure and be a factor off the ball, both actions that lead to a substantial amount of steals (clip 1). On the other hand, his ability to beat the screen is questionable, from time to time (clip 2).

MISMATCH – Guarding a smaller and faster opponent is a type of situation that can put him in a tough spot. In a mid-season game against St. Anthony, he had to face R.J. Cole (6-foot-1, 170 lbs, averaged 21.4 points in his senior year), a 3-star recruit (according to ESPN) tough to contain because of his change of speed, quick first step and speed of execution.

In the Jamboree semifinal, he had to face Teaneck’s tremendous backcourt duo (more than 45 point per game) formed by Ja’Quaye James (Jr., 5-foot-9) and Leondre Washington (Sr., 6-foot-0). Stefanini had to guard both: little to no trouble with the latter whereas James – extremely quick player that can score a lot with his unorthodox but very effective jumper – gave him some problems but almost exclusively in the early part of the game (clip 1) since Gabe managed to limit him relentlessly in the rest of the match (clip 2).

The mismatch with Marcellus Earlington (Jr., 6-foot-5, 255 lbs) was on a completely opposite sign. For the Don Bosco player there’s a college football career in his near future but, right now, he can also make a significant difference on a basketball court (averaged 16.3 point and 11 rebounds this year). Earlington is extremely hard to guard for his combination of weight, strength and quickness. In the Non-Public A North final, Stefanini – while battling under the glass to box out his opponent – tried to anticipate him but didn’t manage to obtain the results he hoped for.

NEXT STOP: COLUMBIA – Stefanini is going to start his college basketball career being able to count on two years of important progresses achieved under the teaching of coach Billy Armstrong. He’s now a versatile player with impressive IQ and technique, able to make clutch plays and gifted with a mature personality that allows him to stay focused even when the momentum is negative. At Columbia, there will be competition within the roster, for sure, since the Lions’ backcourt will be packed with intriguing, quality players for the Ivy League. However, there’s no reason to believe that Stefanini couldn’t have his space immediately, since he’s endowed with qualities that no one can take for granted.