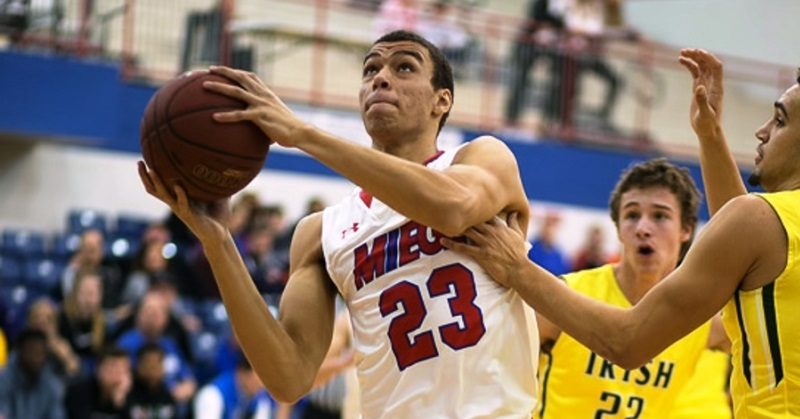 A close look at Francesco Badocchi, back-to-back State Champion with Bishop Miege and near to make his college choice: Illinois or Virginia.

He followed his path quietly, somewhat out of the spotlight, but managed to find his way up as an under-the-radar 3-star recruit with several interesting qualities in store. Francesco Badocchi is about to announce his next destination, Illinois or Virginia (Wichita State came up recently as a possibility but, right now, this option appears to be unlikely since no official visit has been set). Thus, the 1998-born from Milan will have to choose between two vastly different styles of play: on one side, Brad Underwood’s uptempo offense and, on the other, Tony Bennett’s slow paced and defensive strenuous Cavaliers. The Fighting Illini seem slightly on top at the moment. Either way, he will have a chance to compete in a high-major program.

Badocchi – a 6-foot-7, 195 lbs Forward – spent the last two years at Bishop Miege, a high school based in Roeland Park, Kansas where he has been a main contributor in the back-to-back State Championships (class 4A-1) won by his team. The former Basket Cernusco player put together an important stat line as a junior (10.4 points, 4.7 rebounds, 2.3 blocks and 1.5 assists in 21 games) but without having the chance to take part in the championship game because of an injury occured during the semifinal.

Health and luck weren’t on his side in Spring/Summer 2016, so he had to stay out of the AAU circuit and the FIBA youth competitions as well. Not being able to benefit from any exposure event, the scholarship offers came belatedly for someone of his value but, once the first ones arrived in late January, the attention of D-I colleges never stopped growing to such an extent that Virginia and Illinois started to show some serious interest towards him at the end of the season.

Just before that, Miege won its second-straight title, once again defeating McPherson (67-53) in the final act of a season that the Stags ended with a 22-3 record. Badocchi – stepping up in the Championship game with a crucial double-double, 21 points and 13 rebounds – has been an essential benchmark for Miege during all his senior year, first among his teammates in averaged points (14.7) and blocks (2.8), second in rebounds (6.2) and third in assists (1.7). [Complete stats and boxscores at the bottom of this page]

The first and most evident thing that it can be observed watching his matches is his excellent athleticism. Even though he had to deal with some growth-related physical problems in his younger age, Badocchi managed to reach a high-level explosiveness that allows him to get above the rim without any problems.

This also translates in some remarkable shot blocking skills, where his verticality matches perfectly a great sense of timing. He’s highly effective both in one-vs-one situations and when he has to chase his opponent.

His rebounding skills are rather advanced. Although he doesn’t always box-out efficiently, his timing, athleticism and energy definitely make him a good rebounder, especially under the offensive glass.

His ability to jump high is well combined with good ball-handling and a generous dose of quickness and balance, which allow him to be extremely dangerous when attacking off the dribble, since he’s able to score in an acrobatic fashion when necessary and to draw fouls frequently. Most likely, he will have to add some weight in the upper part of his body in order to keep being efficient at the next level. It is quite of a delicate matter, actually, considering how his dynamic qualities are essential in his style of play. No less importantly, he will have to improve significantly his weak hand – the right, in his case – since he almost never uses it in any aspect of the game.

Badocchi is not just an élite athlete but also a player with a valuable basketball IQ. His off-the-ball game is developed enough to make him a threat with his cuts and the ability to take up the space in the paint effectively, both in transition and in the half court.

If he can’t go above the rim, he’s able to score showing some good low post moves and a soft touch.

His jumpshot is kind of a wild card. At the high school level, he was able to take advantage of his length and quickness against most of the opponents, so he usually didn’t need to make a shot whether from the mid or the long range. There’s nothing particularly wrong in his mechanics – although the trajectory of his shot looks often pretty flat – but, right now, its effectiveness is a question mark. Developing a proper game around the perimeter would be an absolute turning point for him.

While contributing in many aspects of the game, Badocchi proved to be a very team-oriented player. He can pass the ball well in more than one type of situation, also showing flair and creativity at times.

He has a pretty good lateral quickness, especially for his height, which makes him a versatile player on defense. Given his athletic skills, physical characteristics (long arms) and reaction, he seems to have a very interesting upside in this area. He can improve a lot his off-the-ball defense but he already has a recognizable ability to be effective on the line.