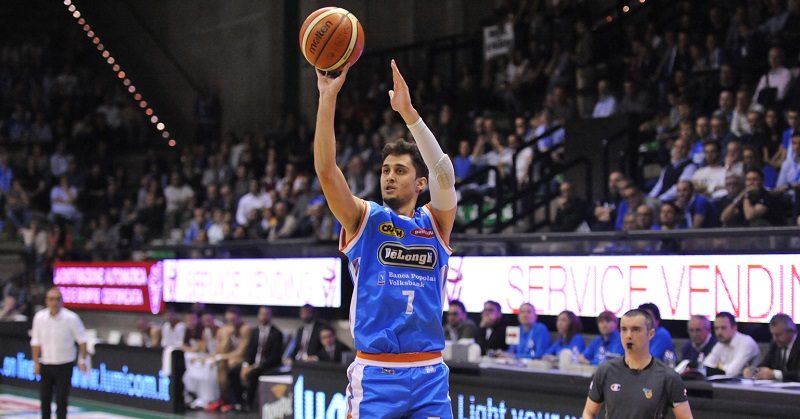 An overview of Davide Moretti’s game. The 19-year-old from Treviso Basket will choose soon his next destination: Indiana, UConn, Texas Tech or Utah.

Davide Moretti is next to make a crucial choice, the most important one of his young career. The 6-foot-2 combo guard always had college basketball on his mind, contemplating it as a possible step in his path. Now he’s in the US, about to start his fourth official visit (Utah) after those at Indiana, UConn and Texas Tech.

Being recruited by high-major programs is not surprising at all in his case: the son of Paolo – coach and former pro player in the 90s – is one of the most prominent european prospects and possibly the hottest name, right now, in italian youth basketball. Recently awarded as the best U22 player of the Serie A2 (2nd italian division), il Moro ended his season averaging 12.7 points and 2.2 assists per game in one of the main teams of this league – Treviso Basket – and will be Italy’s top player at the next FIBA U19 World Championship (Cairo, July 1-9), a team that he already led to a European bronze medal six months ago (14.8 points and 5.0 assists per game).

What makes Moretti an élite european prospect? Let’s see it by taking a look at his game.

CREATING HIS OWN SHOT – A relevant part of Moretti’s offensive talent lies in his strong ability to combine ball handling skills with a very good court vision, which allows him to take up the right spot at the right time for his jumper, even though he will need to get back on track with his 2P% (while his playing time and number of shots increased, he passed from the 44.2% of his 2015/16 to the 38.9% of this season). Most of his mid-range and long-two shots are built from pick and roll plays but he’s also able to create opportunities for himself in less favorable and more unorthodox situations. He doesn’t need much space around him to take a shot, which makes his one-on-one game rather unpredictable and tricky to contain.

BEYOND THE ARC – Three-point shooting is one of the main weapons of his répertoire. In this last season, he put together a very respectable 37.7% from beyond the arc (61/162 in total, averaging 4.4 attempts per game), proving how much of a threat he can be in catch-and-shoot situations, especially – but not only – as a spot-up shooter.

Pretty smooth stroke, quick release: Moretti is extremely confident about his shot and never hesitates to pull up a jumper off the dribble whenever he has enough space.

ATTACKING THE BASKET – Moretti hasn’t the strongest frame or the most noticeable athleticism (although his upper body bulked up progressively during the last two years and he’s quick more than enough for his role) but this doesn’t stop him from being a threat near the basket, since he has very good balance, ability to make shots in spite of contacts and a highly effective floater that he uses often to avoid blocks by his opponents.

His confidence in attacking the paint has much grown during the last season, resulting in an increased number of attempted two-point shots compared to his three-pointers. Not less important, he’s extremely good in drawing fouls (4.2 per game this year, 5.1 during the playoffs) and getting to the free throw line, where he shoots with a remarkable 86.3%.

OFF THE BALL – In the past, we got used to see him creating offense mostly when keeping the ball in his hands: for this reason, his ability to read the defense and make cuts to the basket is an improvement that stood out during the last year and that added some substantial variety to his game.

PASSING SKILLS – Being a combo guard, Moretti spent, roughly, equal playing time at the 1 and the 2 position. At the point, he handles the ball well, being able to play at different speeds and proving to be highly suitable for the slow-paced style that was typical of his team for most of its lineups. With Treviso, it was relatively rare to see him involved as a passer in drive and kick plays while, on the other hand, showed excellent ability in feeding his teammates in the low post, even in tight spaces.

NOT YOUR TYPICAL FRESHMAN – After some short but significant appereances in Serie A (1st italian division) with Pistoia, two straight seasons covering an important role for Treviso in Serie A2 and many international games played in FIBA youth competitions since he was 15, il Moro will enter the NCAA having much more experience than the average Division I freshman.

Even more important, he can contribute immediately at the high-major level thanks to his extensively proven leadership and inclination to take over the game down the stretch. The number of clutch plays he made both with Treviso and the Italian Youth NT during this last season is really impressive (his last effort of this type: a series of three-pointers in Game 2 of the Serie A2 Round of 16 against Trapani). Here below, one of his most thrilling buckets: the game winning shot against Forlì (58-55).

THINGS TO IMPROVE: DECISION MAKING… – A brief premise: Moretti has a superior feel for the game, compared to most of the players of his age (and not just in the picture of italian basketball). Talking about the need to improve his decision making may seem here some kind of nitpicking: however, being an élite prospect at the european level, it is legitimate to think that making serious progress in avoiding to rush decisions and forcing one-on-one plays, would aloud him to enter a completely mature dimension and that, after two years among the pros of Serie A2, he is and must be ready to make this step forward.

… AND DEFENSE – So far, as of today, defense is still the weak spot of Moretti’s game. Under the two-years care of coach Stefano Pillastrini, he made a few improvements: he can make some smart steals when double teaming, he is quite reactive on long rebounds and – rather surprisingly, considering his size – being effective in off-the-ball defense around the short corner. As for the rest, there’s still much work to do: put more pressure on the ball handler, make better help defense choices, improve his lateral quickness and his pick and roll defense, which is most definitely his main liability in this end of the court.